Game Based Learning: or how to make learning fun! 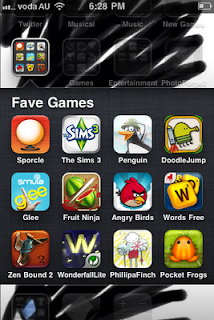 Everyone knows the joy of playing a game whether you grew up with board games, marbles, soccer, arcade games, Atari, Gameboy, Playstation, Nintendo, Xbox or Wii. The fun and competitiveness of playing against yourself and others can be addictive! Regardless of whether these are real life or digital games, there are rules and expected outcomes that players must determine and achieve. While concentrating hard on the game, players don’t even realise they’re learning! Recently people of all ages have started gaming like crazy as mobile apps make it easier than ever to play cheaply, anywhere-anytime, alone or with people around the world (if you haven’t heard of Angry Birds you’ve been living under a rock). One of my favourites is Fruit Ninja where you chop fruit with a sword and at the end of every game you get a fruit fact! Games are usually considered a leisure activity but increasingly they’re being used in learning environments to encourage experiential, active learning. For some reason they’ve been more commonly used with younger learners but why should they have all the fun? Just because you’re at high school, Tafe, uni, work or the library doesn’t mean learning has to be boring! Right? In fact, the 2011 Horizon Report predicts Game Based Learning will impact education in the next 2 to 3 years.

According to Wikipedia, Game Based Learning is a branch of serious games, which are activities with defined learning outcomes. 10 years ago, people like Prensky started pushing the digital game based learning (DGBL) revolution because of the potential for learning to be fun and engaging for the students, the trainers, parents and administrators. In 2001 Prensky described a tipping point when he believes learners will demand game based learning. Considering the current ubiquity of games and the blurring of the lines between work and play, I think we might have finally reached that tipping point.

Game based learning is certainly not new. Just think about simulation activities and software used for many years with doctors (did anyone play Operation?), nurses, pilots, defence personnel and many, many more. These learning games prepare people for real life situations by allowing them to safely practice and complete expected outcomes. Second life has also been very popular as a learning environment for many years, particularly in tertiary education. It allows geographically dispersed groups to meet up, interact and complete tasks while in the game. It has been particularly useful for the areas of engineering, design and architecture because groups can design and build large scale projects, that in real life would only be scoped as models or prototypes. Check out the Horizon report for many more awesome examples.

So what are libraries doing? Quite a bit actually! With the rise of mobile apps there’s been a move away from entirely online games to a blend of online, mobile and real life. The State Library of Queensland is using a scavenger hunt app to create self guided library tours using geo-location technology. In fact it seems treasure hunts and scavenger hunts are all the rage in libraries at the moment. The University of Technology, Sydney (UTS) and Charles Darwin University (CDU) libraries are doing treasure hunts with QR code clues to enhance information literacy instruction. These three projects were recently presented about at the 2011 m-libraries conference in Brisbane. The University of Sydney Library ran a scavenger hunt around all campus libraries during orientation this year and the New York Public Library invited 500 people to an overnight library scavenger hunt (particularly awesome) which they describe as an alternate reality app based game.

So what is all this hunting and gaming doing for us? Well, according to the 2011 Horizon report we’re learning by reaching for and achieving goals, problem-solving, collaborating and communicating. We can interact with content in more complex ways and build digital literacies. They also acknowledge that students are more engaged with game based learning because it’s fun! There are some great examples in the report and I think it’s interesting to consider how this links with other trends they predict such as Augmented Reality and Gesture-based Computing. Something to ponder.

Besides ‘hunts’ there are many other library games being developed like augmented reality apps using data mashups by the Bavarian State Library (among others) and a location based checkin and reward game by some people at the University of Huddersfield library (definitely want to know more about this one). There are Fun Days and Flash mobs, flash cards and quizzes, chases and Amazing Races (check out my Game based learning Diigo group for more examples). There is already quite a bit of game based learning going on but if trend predictions are correct it will soon be the norm rather than the interesting exception. How will libraries, museums and organisations rise to the challenge of providing game based learning opportunities? Some of the things I've described require tech skills and money to make possible but others only require a few people and some enthusiasm! It's time to get in the game but just remember it's not about winning it's about having fun!

Now I apologise if any serious gamers are reading this because I'm not one, and I probably haven't used the right lingo to describe things. But that's the point. You don't have to be an expert. You just have to have a go. For those interested, there is a lot of theory behind serious games, gamification and game based learning - if you want to get into that kind of thing. And if you're already into it please share your resources in the Game based learning Diigo group.

Sophie McDonald is an ALIA Sydney committee member, blogs at MissSophieMac and tweets @misssophiemac
Posted by ALIA Sydney at 11:13