The purpose of this post is to promote just some of the excellent services and initiatives the Librarians of the Holroyd City library services have undertaken. I feel that Western Sydney Librarians are overlooked when discussing the industry in Sydney, so this post attempts to address this issue.

Merrylands Central Library
The Library building was constructed in 1999 and makes use of natural light through glass walls along its North and South sides. Reading nooks on the south side give a comfortable space for clients to read. I really enjoy the use of natural light in this building. On sunny days it feels very invigorating, but on rainy days there is more of a serene feeling when reading or browsing. I like that the weather and light gives a different mood to the kind of activities that one can do within the library space. The large staircase leads up to the nonfiction, local history and the main computer space. There are also individual study desks for laptop users. 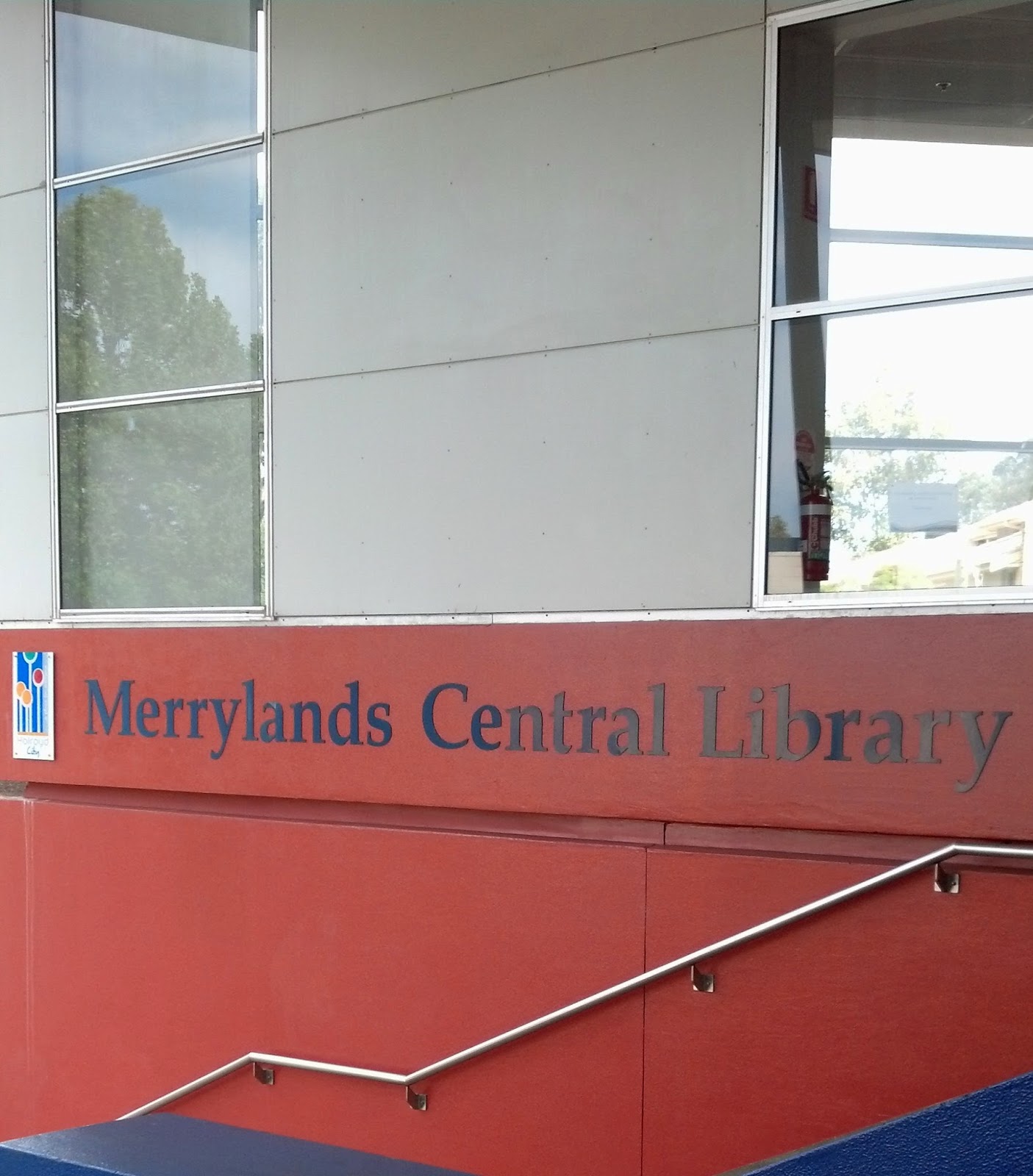 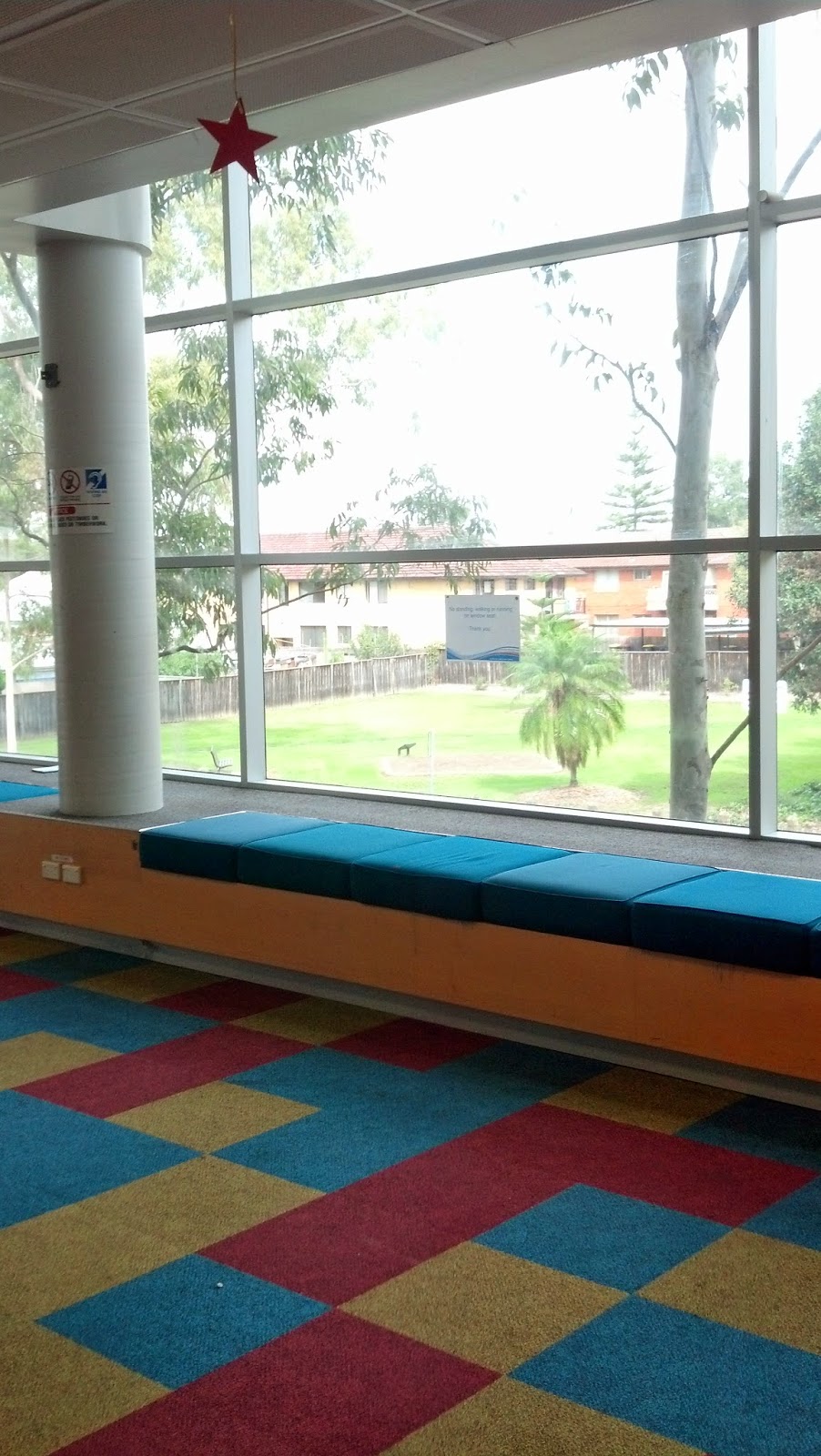 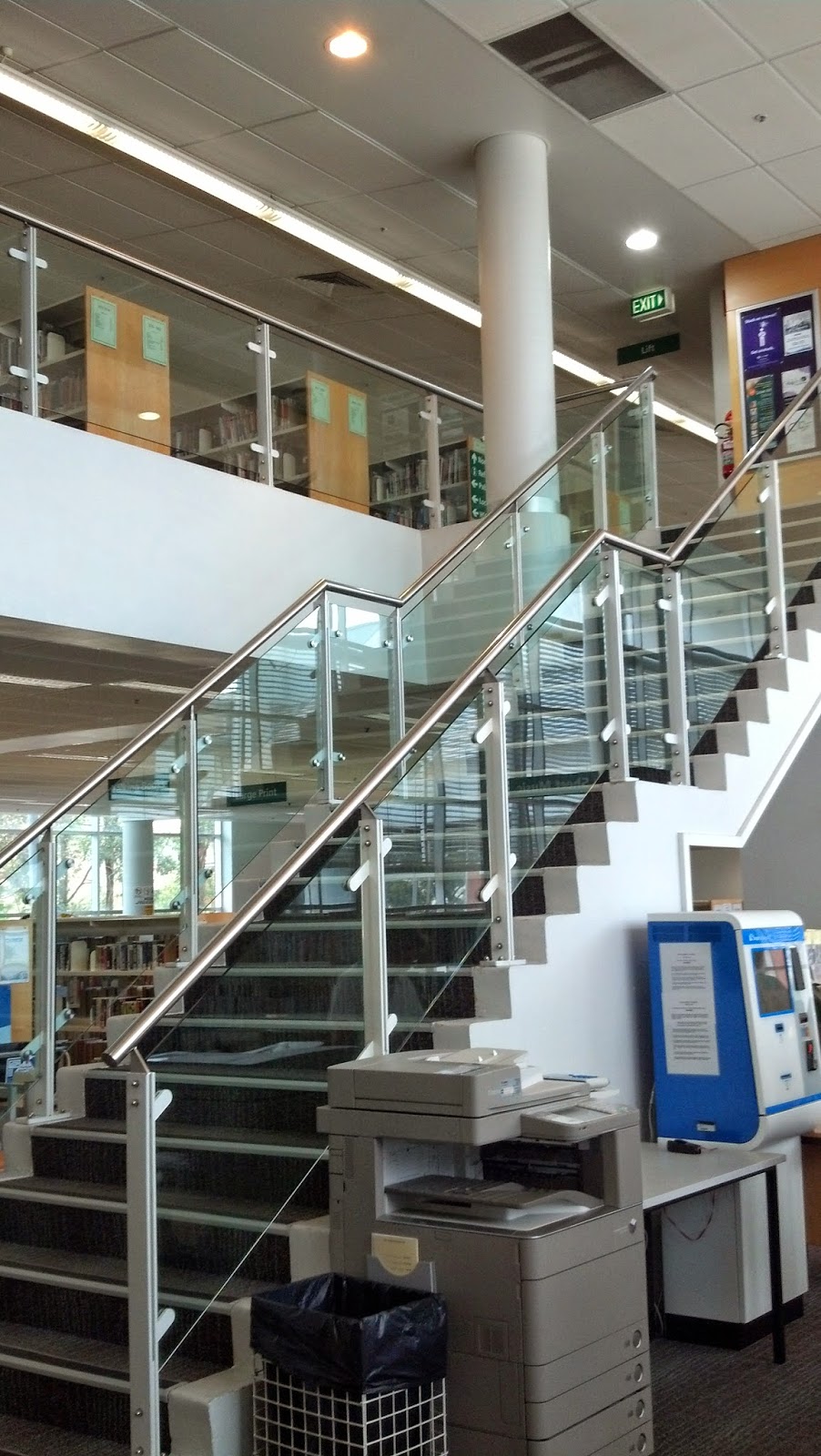 The stair case, leading to the 1st floor. There is also a lift.

LOTE Collections and services
Merrylands is a culturally diverse suburb, with five main cultural groups represented in the libraries LOTE (Languages Other Than English) collections. I spoke with Charina Kofod the Client Services Librarian about this collection. Arabic, Chinese, Hindi, Persian and Tamil are strongly represented at the Merrylands collection. There is also a collection of Gujarati and Vietnamese material, with most of the Gujarati collection at the Wentworthville branch.  Along with the LOTE collections, there are also several IELTS (International English Language Testing System) kits available for loan. These kits help English students develop their skills in preparation for tests.

During consultation with Arabic speaking community members, it was found that DVDs and Magazines were the most popular format for adults who maintain busy social lives. Books on specialised topics such as medicine and the culinary arts were quite popular. Community language newspapers are also collected by the library, and are especially popular. Merrylands provides for a wide variety of languages, and makes good use of the SLNSW’s multicultural collection service when community members request items in languages not generally held by the library, such as Russian or French. 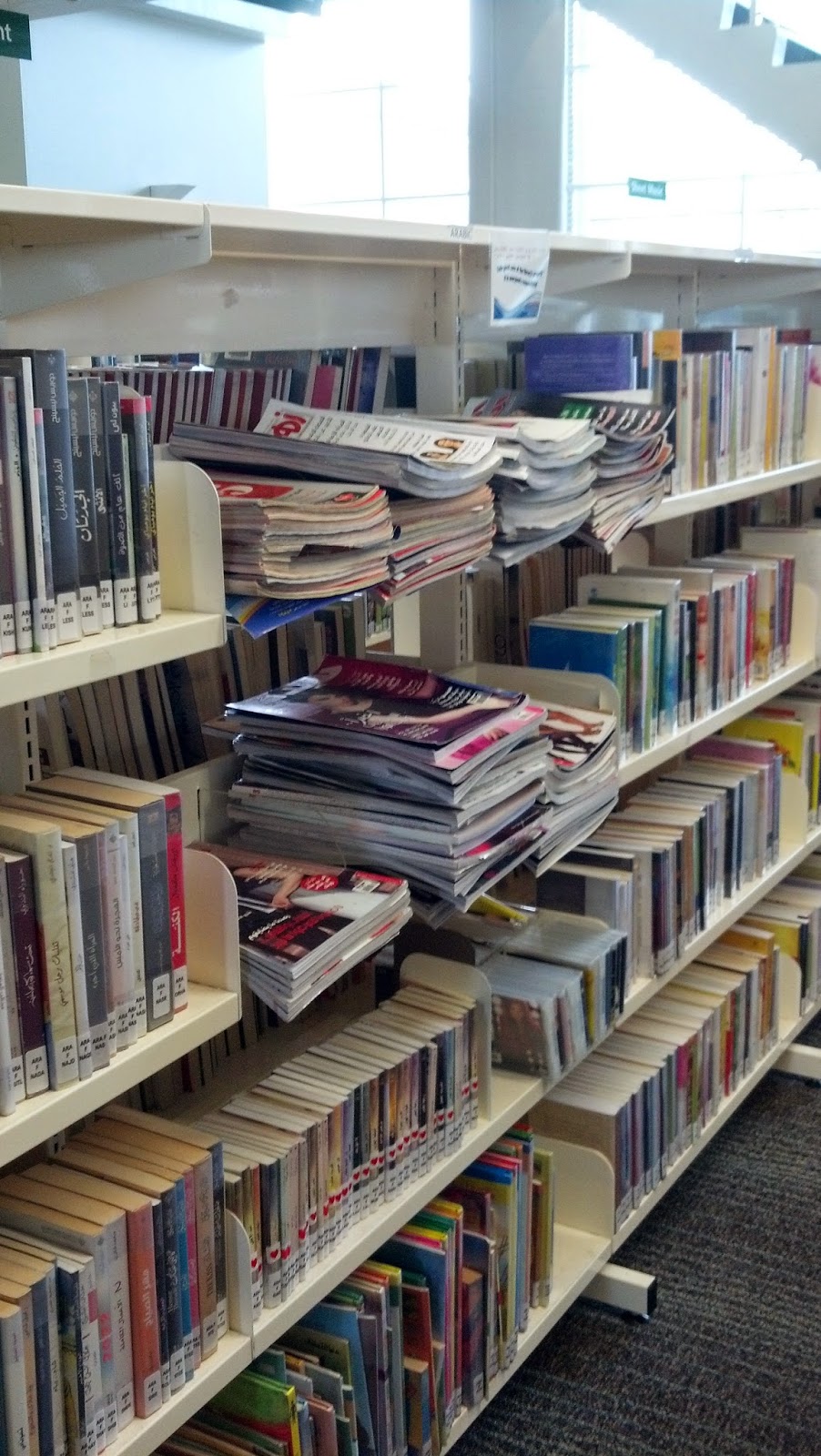 Magazines are a very popular choice

Several events in community languages have been organised such as Computer classes in Turkish and Persian New year celebrations.  A Chinese language book club is run through Merrylands and is hugely popular.  For children, there are bilingual story times which run regularly throughout the year.  A passage from the day’s book is read in English, and then in the community language that is being presented. These story times see many more children and their parents taking part. Eresources such as IELTS databases and modules have also seen extensive usage in the library.

Local Studies
Merrylands library contains a sizeable local studies room, named after the late local photographer Tony Matson who donated a large part of his work to the library before he passed away. The Local Studies librarians- Jane Elias and Steven Coppins have recently published a history on the Holroyd area, drawing on their extensive collection of photographs and other archival material. Work on the book coincided with the Council’s 140th anniversary in 2012 and was complete by 2013. The last work on Holroyd was published in 1991. Jane told me that she and Steve were keen to address Holroyd’s modern history, and conducted interviews with the community members and local businesses.

Writing the book also gave Jane and Steve the opportunity to strengthen the libraries’ relationship with local Churches and Schools- whose own publications were used during the research phase of the book. SLNSW was also an invaluable source for research. All of this original research and writing was done on top of Jane and Steve’s normal work load, an excellent achievement!
The Local Studies librarians, in collaboration with many other libraries across Sydney, have recently finished a project digitising a newspaper known as “The Cumberland Argus and Fruit Growers Advocate”.  Based in Parramatta, this paper had a very wide distribution during its publication from 1887 to 1962, reaching all the way up to Hornsby in the North and down to Campbelltown in the South. You can find The Argus on Trove, along with a list of contributors. 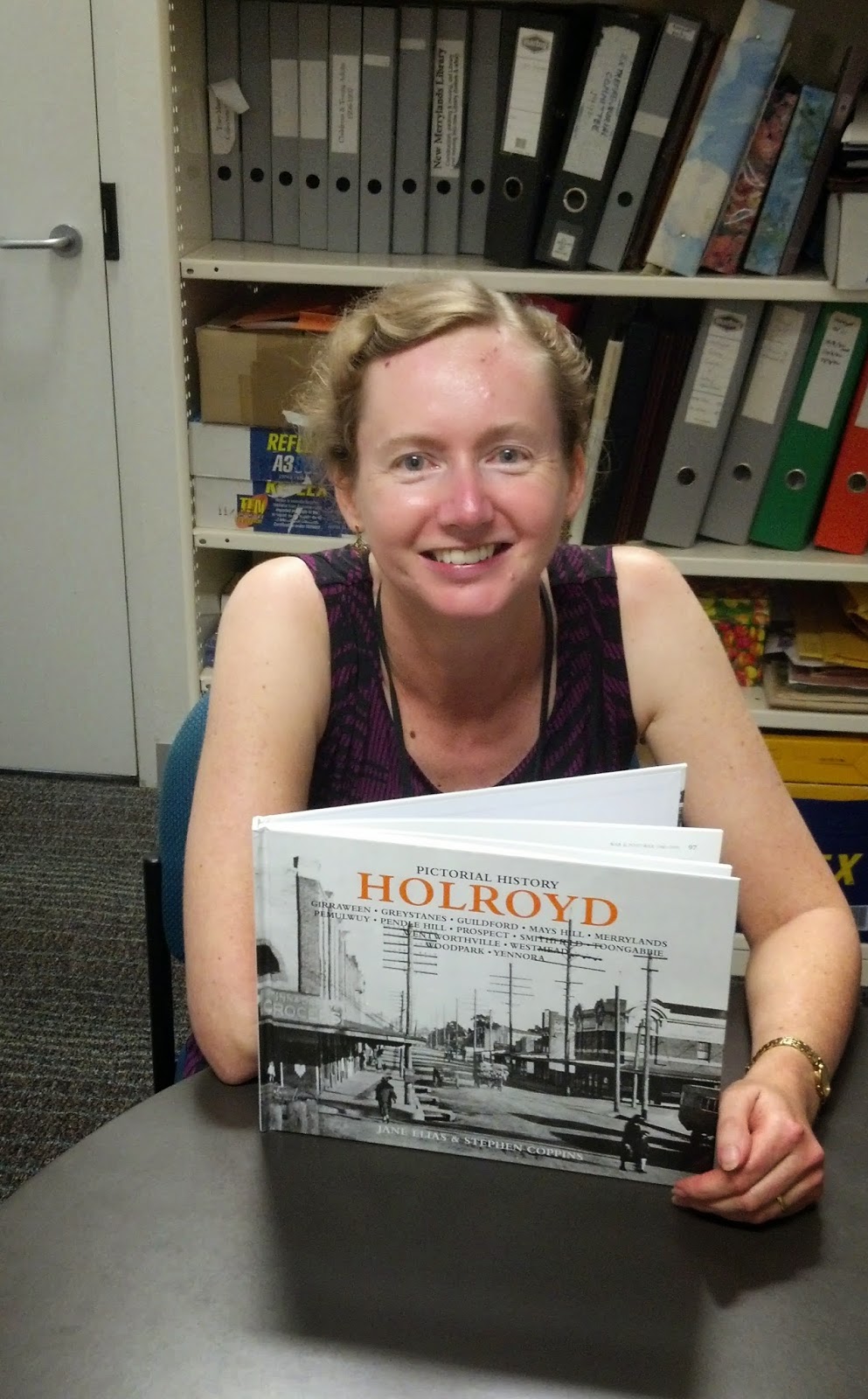 Jane the Local History Librarian with the book on the Holroyd area.

To commemorate the centenary of World War One, the Local Studies librarians have several displays and projects planned for their community, and to show the part Holroyd played on the home front.

Wentworthville
The suburb of Wentworthville has a smaller library than Merrylands, but has an excellent toy library collection. I talked to Lisa Phillips; the librarian who works with this collection, Monica Zapatarojas also works with this collection but was not available at the time. There are not many library services in Sydney that offer toys to their clients, and Wentworthville’s collection is very large, with around 3,000 toys and over 2,000 borrowers.
The toy library is a hugely popular service offered at the library, with about two thirds of the collection on loan at any given time. Wentworthville has a lot of high density living units- so having access to the toy library allows kids to play and learn, and for parents to not sacrifice too much space permanently with large toys. Toys for babies to pre teens are collected, with the emphasis on babies to children about eight years old. The collection was originally focused on educational toys, but has now expanded to include toys for play. There’s also a couple of packs designed for parties! Lisa tells me that all toys at the library provide motor development and assist in developing problem solving skills. 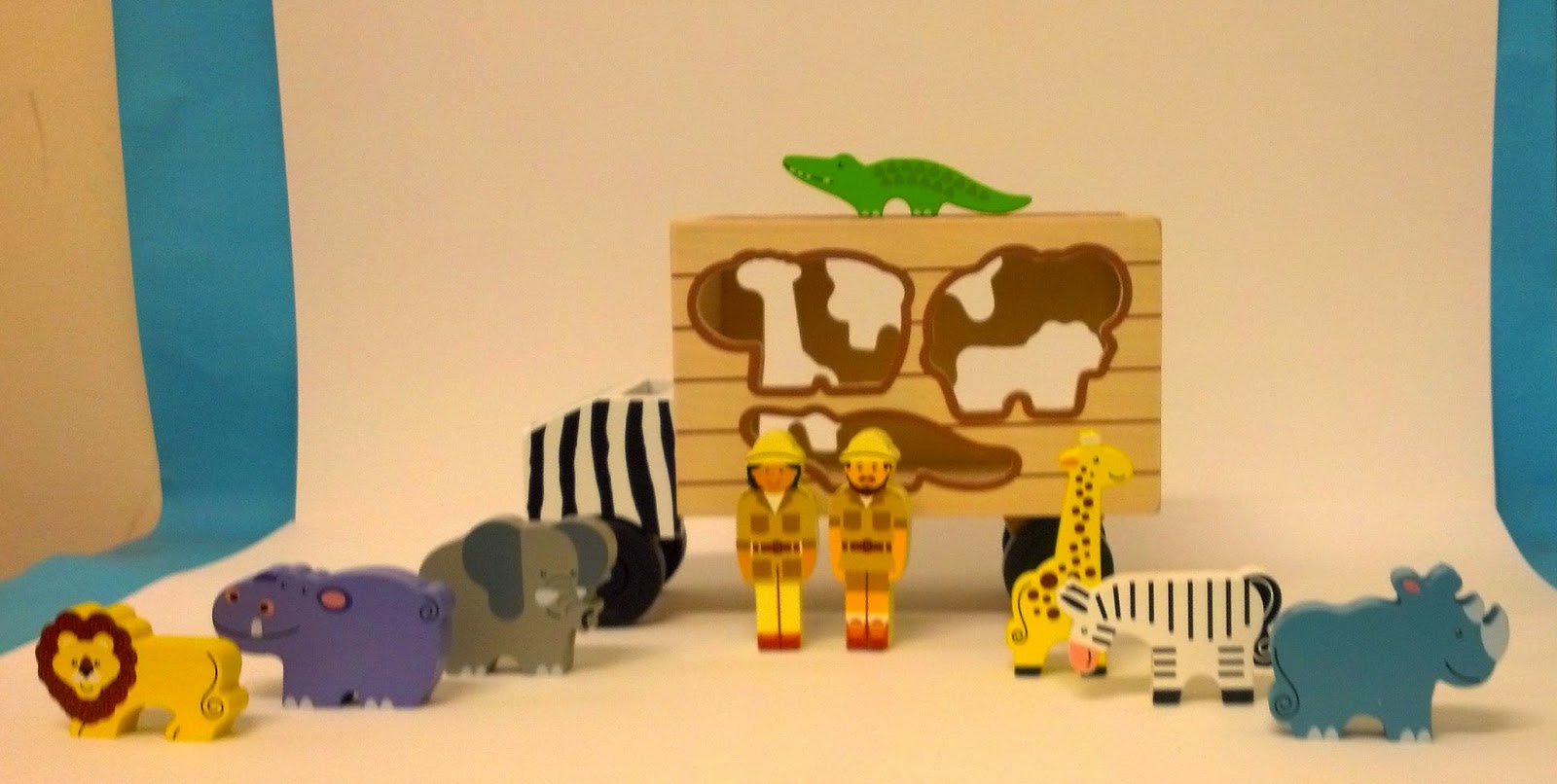 Some examples of the toys children may borrow. 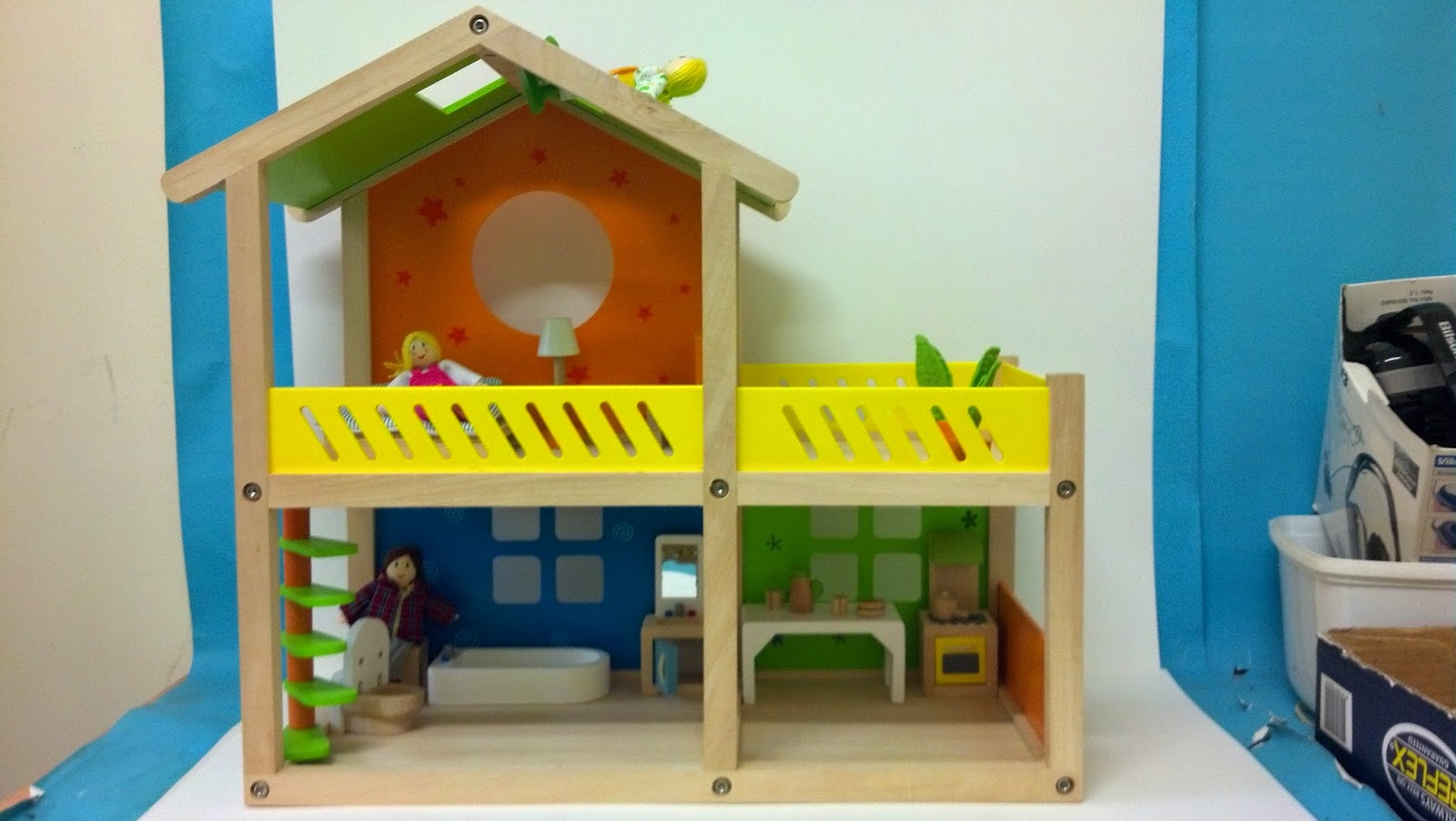 Children who have special needs are allowed to borrow more toys than a regular toy library borrower. Lisa told me that she and Monica have been working with the Cerebral Palsy Alliance to begin including Switch Toys into the Toy Library and then promote the collection. A Switch Toy is a modified toy that allows a child to push a button or switch to activate a battery operated toy. This modification gives children with a disability the chance to learn and play. When these toys are introduced, they will only be available to children with special needs. These resources are so vital to children with disabilities and I’d love to see more libraries offering similar resources for their community. 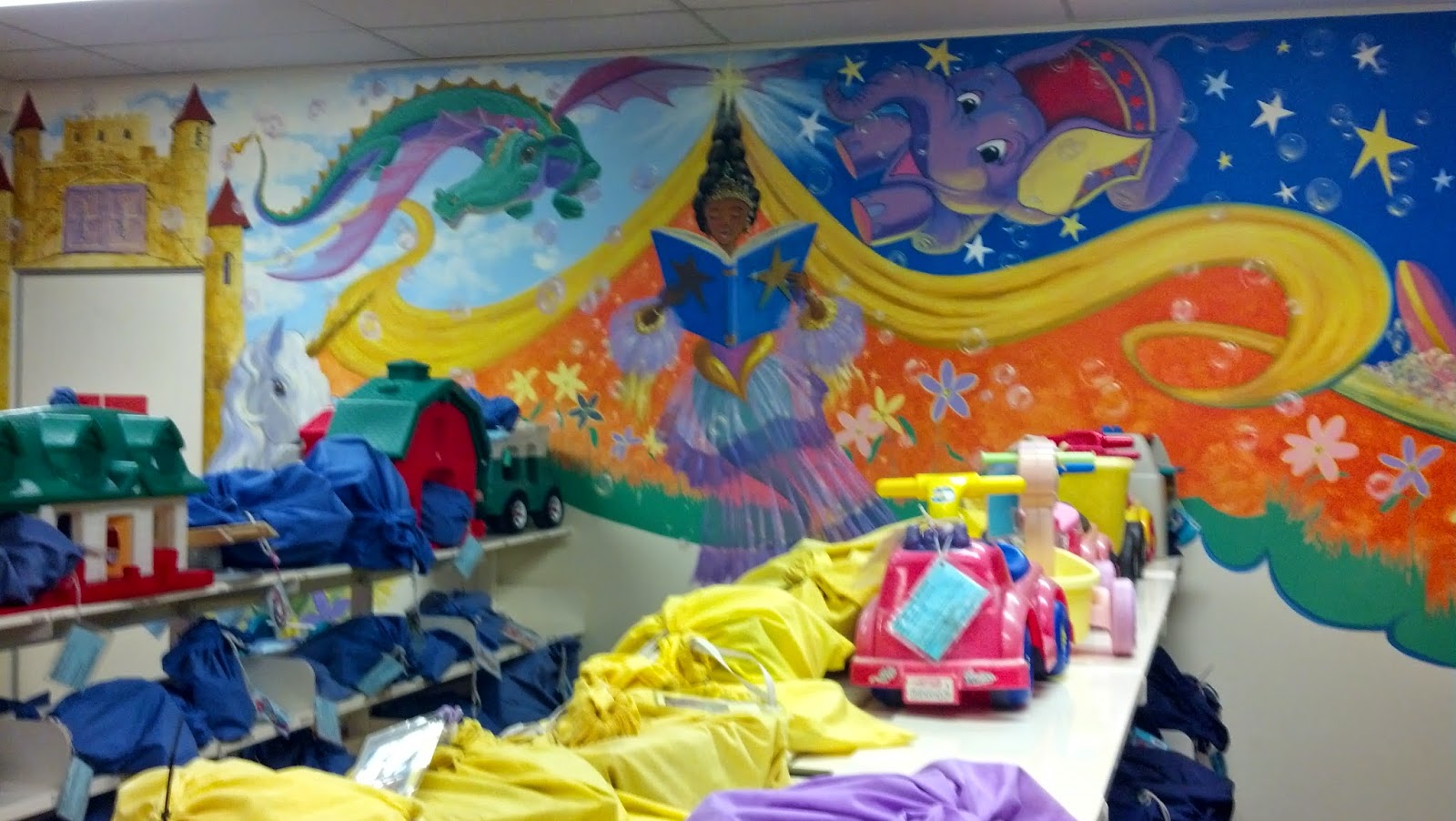 Toy bags are colour coded to match the age level or sort of toy in the bag. 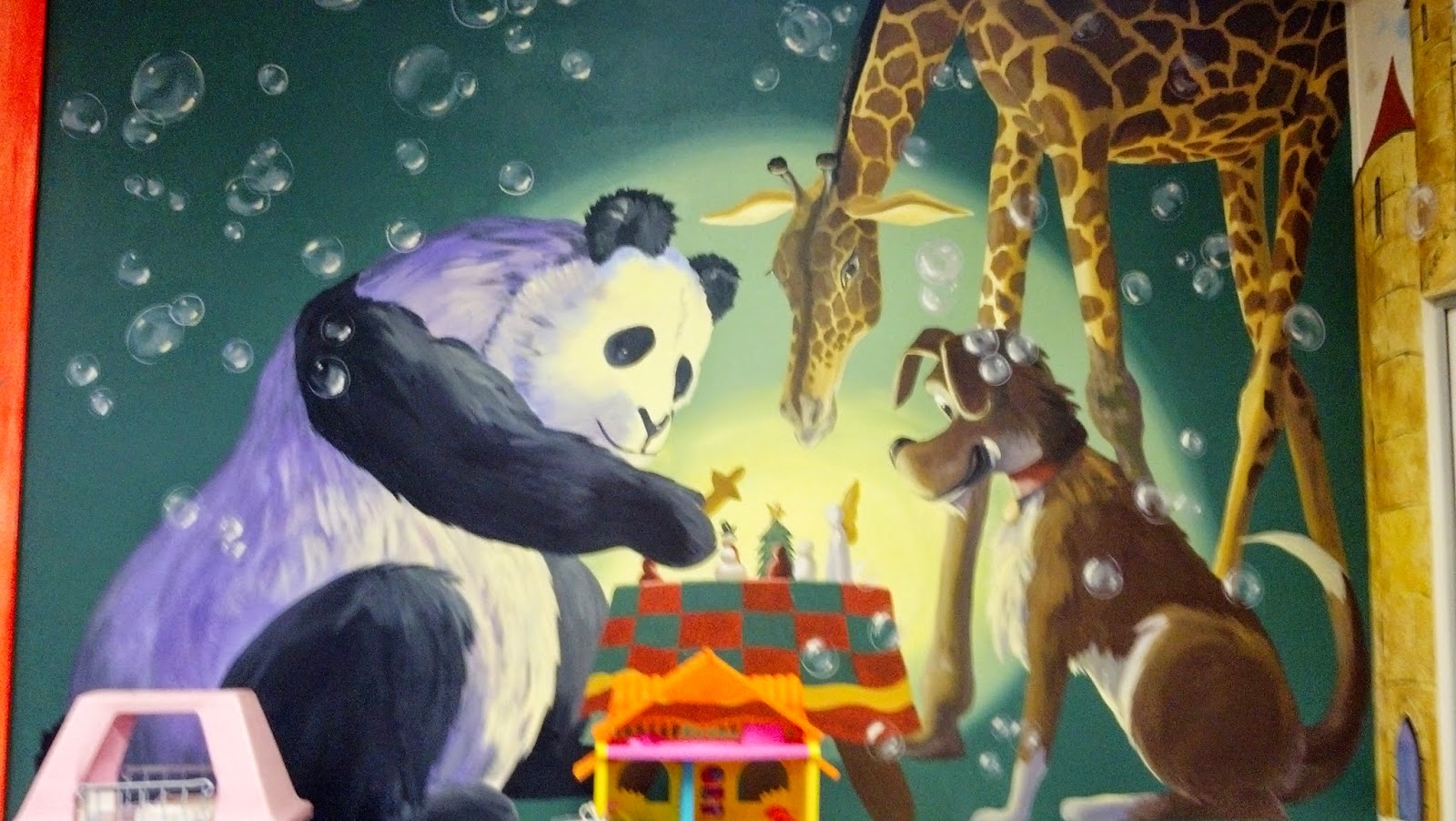 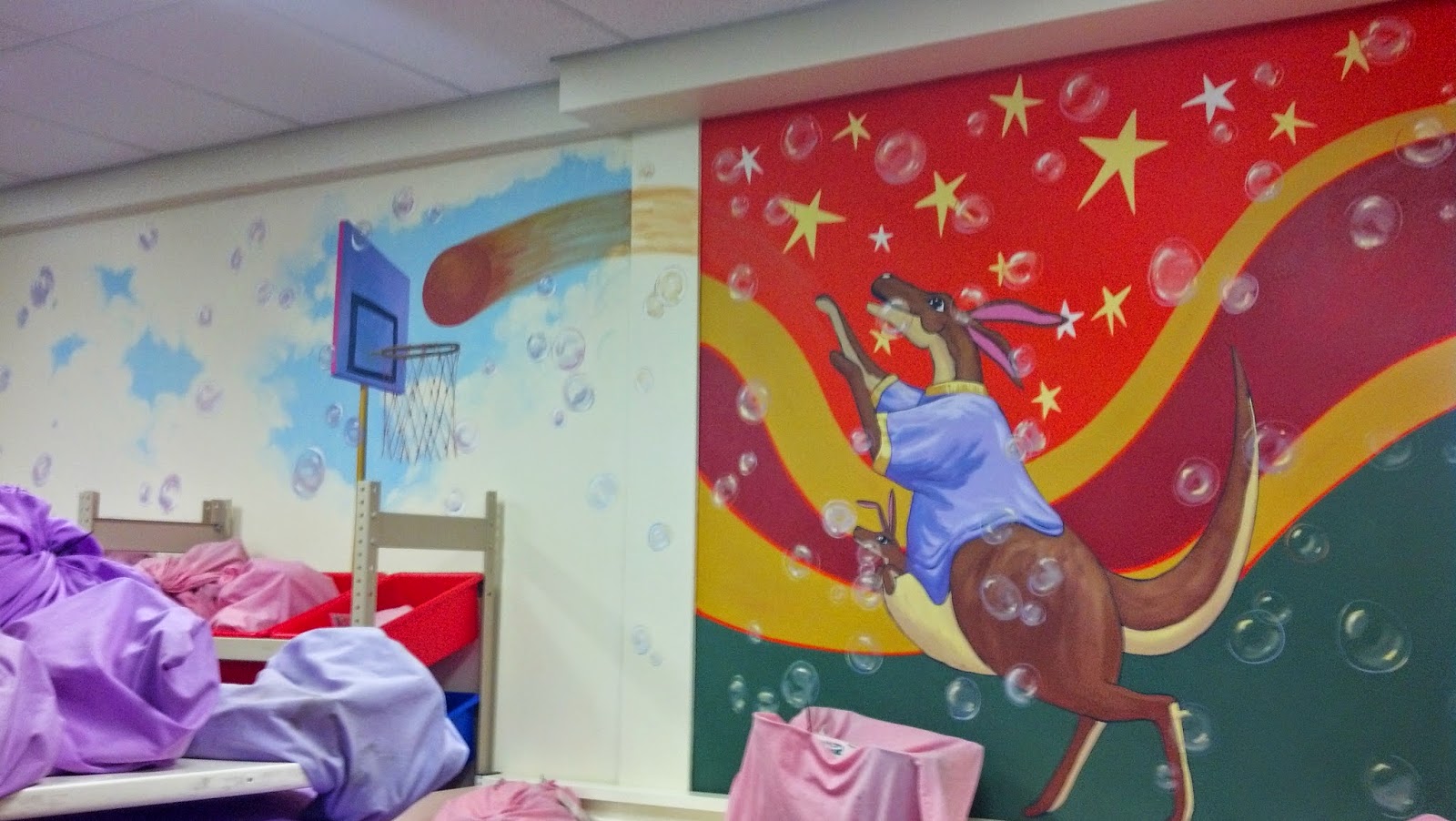 These beautiful murals decorate the walls of the Toy Library section

The services, resources and events offered by the Librarians at the Holroyd city libraries are excellent and an integral part of their communities. Thank you very much to all who agreed to give up their time for interviews to discuss their valuable work.