Four libraries of Ireland and what they can teach us…


It’s no surprise that a country home to literary greats like Oscar Wilde and James Joyce should have some amazing libraries. I’ve just returned from a trip to the library land of Ireland having chronicled a list of my favourite Irish libraries and what they can teach us here in Australia.

The Old Library at Trinity College features consistently on lists of the greatest libraries in the world. This is because it is enchanting. The Old Library has a hushed reverence that draws thousands to its quiet halls, wandering among the rows and rows of antiquated tomes. 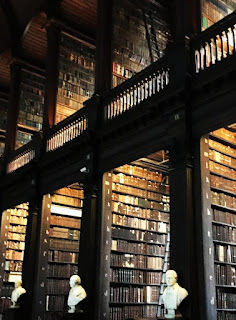 The Old Library can teach us two things. Firstly, it is a legal deposit library and it highlights the importance of keeping legal deposit books in an archive for future generations to enjoy. Secondly, the Old Library is living evidence that people still love libraries and still love books on shelves. The day I visited lines of people stood waiting in the rain just to catch a glimpse of its Book of Kells, an illuminated manuscript of the four Gospels thought to have been created in c. 800. In the halls of the Old Library cameras and iPhones snapped away but even amid modern technology this library with its shelves and shelves of books remains timeless.

Marsh’s Library is the oldest public library in Ireland. This library taught me the value of unexpected libraries and that meaning can be found in things we might think are irrelevant or foolish. Marsh’s Library is like something from a Halloween story with shelves full of heavy tomes and creaking floorboards. But here I found a library embracing the present as much as the past. The library even has its own Facebook page! 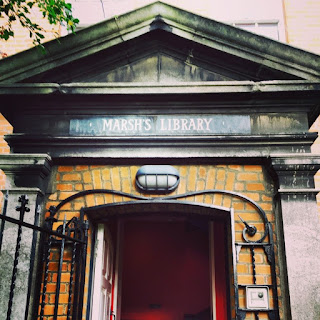 When I visited Marsh’s Library they were holding an exhibition of marginalia, sketches and notes written in the library books that readers have added over time. Titled The Unicorn and the Fencing Mouse, after a sketch depicting both, this exhibition featured annotations made by hand in medical texts and other volumes. I loved the quirky, unexpected nature of this exhibition. It gave meaning to what might otherwise be considered trivial notations, even graffiti.


Chester Beatty Library
The Chester Beatty Library is part of Dublin Castle and houses religious and secular manuscripts dating from 2700 BC. This library also awakened me to the role humour can play in libraries. One of their many exhibitions was titled “Wicked Wit” and depicted the use of political cartoons in documenting relations between Ireland and Britain. This collection of cartoons reminded me of the potential for libraries to key into historical humour in their exhibitions. Our exhibitions can be entertaining and light-hearted as well as informative. 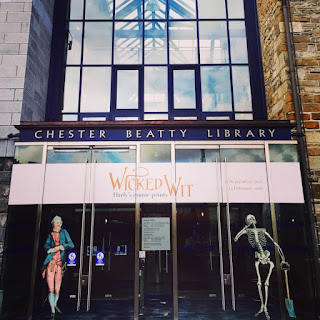 Another lesson I learnt from the Chester Beatty Library is how libraries can be embracing of all religions. In the exhibition galleries excerpts from the Quran went hand in hand with exhibitions about Christianity, proving that libraries truly are pluralistic institutions.

The National Library of Ireland

The National Library of Ireland taught me the value of genealogy as a way for people to piece together narratives of the past. The Library has featured internationally as a recommended tourist destination for genealogists. This is because of the rich and varied history it preserves, including the Library’s unique set of Catholic parish registers. The National Library of Ireland also has a significant manuscripts collection which includes such gems as letters of Oscar Wilde and the papers of Irish poet, W. B. Yeats. 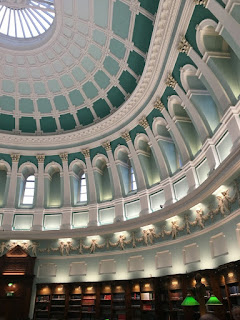 Visiting the Genealogy Advisory Service in this library impressed upon me how family history research is intrinsically tied to our social histories so that a name on a census can tell you about gender relations or economic status. It reminded me of the social and historical importance of the detailed family histories our clients are compiling in libraries every day.