Some people collect shoes, their closets a dazzling rainbow of stilettos. They treasure glittering ruby slippers and purple cowboy boots. But I never understood shoes. I collect libraries. My Instagram account is a dazzling rainbow of photographs from libraries I have visited. I treasure the amazing foyer in the National Library of Latvia and the colourful book sculpture ceiling at QUT Library, Kelvin Grove.


In an article for The Guardian newspaper psychologist, Christian Jarrett put forward a theory of collecting. He argues that collecting is how we cope with hidden anxieties and desires. It’s how we make up for the feeling of being unloved or create intimacy with celebrities. It’s even ‘survival of the fittest’. We accumulate possessions to enhance our status in a consumer-driven society.

As a teenager I collected memorabilia from the sci-fi drama, The X Files. But my early collecting efforts were restrained, even half-hearted. I read about a young woman who used her entire pay cheque to buy the much coveted X Files bomber jacket. Such a ruthless, uncompromising passion for collecting was foreign to me… until I started collecting libraries.

My collection began last year in St Petersburg. I found a rare collector’s item: the National Library of Russia. I stood outside this magnificent library surrounded by marigolds, in a courtyard looking up at the sky. And that was the moment I knew I would collect libraries.

For a collector the desire to acquire goes beyond reason and sense. I nearly missed the tour bus from Lithuania because I was entranced by the Wroblewski Library. I braved severe weather warnings in Minsk so I could see the National Library of Belarus. In a Moscow underground station I walked up to strangers and asked for directions to the Russian State Library using the only three words I knew in Russian language: please, thank-you and library.


For me collecting libraries is challenging. But when I look at the photographs on my Instagram account I don’t think of the difficulties, the anxiety or the confusion. What I remember is how visiting the Wroblewski Library was like kneeling in a church. Being under a glass roof in the National Library of Belarus felt as though I were standing beneath a canopy in a tropical rainforest, watching the rain drops fall. I remember sitting on the majestic stone steps of the Russian State Library, watching as people meet and greet on a sunny autumn morning. Whether I’m in Moscow or Melbourne, what I see are libraries as meeting places, places of community.

I have collected more than twenty libraries now. I finally found that ruthless, uncompromising passion for collecting. And the girl who spent her entire fortnight’s pay on an X Files bomber jacket: that is me. Only it wasn’t a bomber jacket, it was a deposit on a trip to London. So I can finally add the British Library to my collection.

Jarrett, C 10 Nov 2014, “Why do we collect things? Love, anxiety or desire” The Guardian, Life and Style, online

Make Your Own Fun

Since reading about the Little Free Library movement, I have paid more attention to micro libraries as I have come across them in my daily life. Have you noticed any?

They are quite common in holiday accommodation, and are appearing in upmarket apartment buildings. I saw one set up in the staff room of my children’s school, where staff put books on a shelf that were available for others, mainly fiction, but also some books about education, available with the expectation of a swap or return. I spotted this same sort of arrangement in operation at Roseville Bowlo, and at Roseville Golf Club, where members have some shelf space to leave books and take books for the enjoyment of all members. (In my experience, these two types of club are also excellent sources of health care information, especially if seeking information and recommendations for health specialists in the area, with the possible exception of obstetrics, and new medication or medication combinations for chronic or ongoing medical conditions. Your doctor will be amazed!) 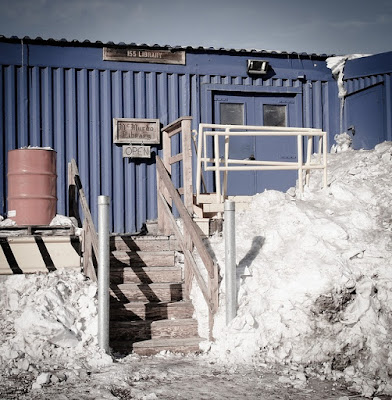 Remote communities have always experienced challenges in the provision of library services and have found ways and means to overcome these. In recent years a friend of mine has worked summers in Antarctica, and tells me each station has some kind of library. At South Pole it is an honour system with a few historic books you can check out from the store. At McMurdo it is more of a traditional library that is run by volunteers with check outs. Most of the books were probably brought down and left or sent as donations. The advent of ebooks and ereaders has positives and negatives in that environment. The station library has a bunch of e readers that can be checked out, however, I am told the wireless gets turned off in summer months, so they don’t always work well. My friend also was able to purchase ebooks for her reader and transfer them across using USB, but had some challenges borrowing ebooks from her local library (in Alaska), and had to phone Amazon from Antarctica to give them the device number so it could be linked to her account. After this, it worked well. Another friend was living and working in Myanmar and we sourced some book donations for a children’s library set up by a local community worker. Printing, especially colour printing, had been prohibitively expensive, and after a local freight forwarder came to the party with some free shipping, we shipped perhaps 10 boxes of books to seed this library.

Now consider communities in space. Some time back a Freedom of Information request produced a list of material in the multi media library of the International Space Station, supplied by NASA. I am keenly awaiting the new movie “The Martian” . In one part the main character, Mark Watney, investigates the music library left by one of his colleagues and laments the heavy weighting towards disco. This won’t be a problem in the planned future of Mars colonies if Elon Musk’s vision comes to pass.

This year’s Hallowed Ground offering is titled Unexpected Libraries and promises to be another success in this annual series presented by City of Sydney Libraries as part of the Art and About festival, in conjunction with ALIA. It’s been fully booked the last two years, so if you are thinking of going, book now. It has been a great social and networking catch up for the Sydney library community, with interesting considerations of the future, and lots of choices for post event catch up venues. Hope to see you there, 7th October, 6.30pm - 7.30pm.


Following the success of last year's event at Ashfield Library, Comic Con-Versation is back in 2015, even bigger, and now presented jointly across several libraries in Sydney.

If you have a personal or professional interest in graphic novels and their kin, mark your diary to find out about the local scene for working writers and artists, events for the public who love this style, and workshops for those who want to begin creating their own works. A broad range of events are presented across six libraries over the six days, with exhibitions, workshops, children's activities, panel discussions (a highlight for me last year), and a visit/photo opportunity from the Iron Throne at Concord Library, all capped off by a closing evening at Ashfield Library on Saturday 3 October from 3pm - 8pm. Some events require bookings, so get your act together soon.

With graphic works being mined for movies and TV,  prose works being reworked into graphic form, and graphic works for education growing, build your knowledge of this format and geek out with some of your established favourites. Last year's event was so rewarding (See my blog post from then) I can't wait for the long weekend to come around. 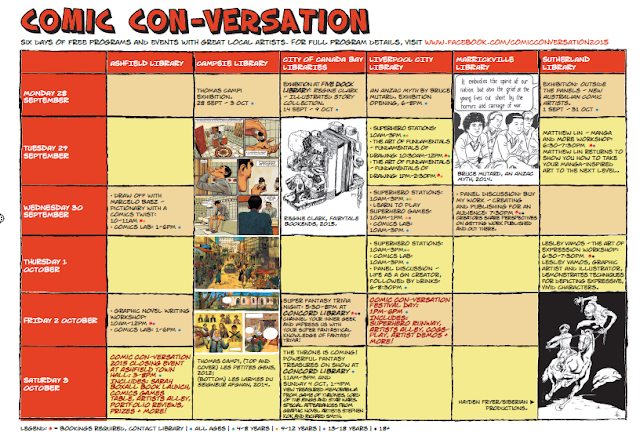